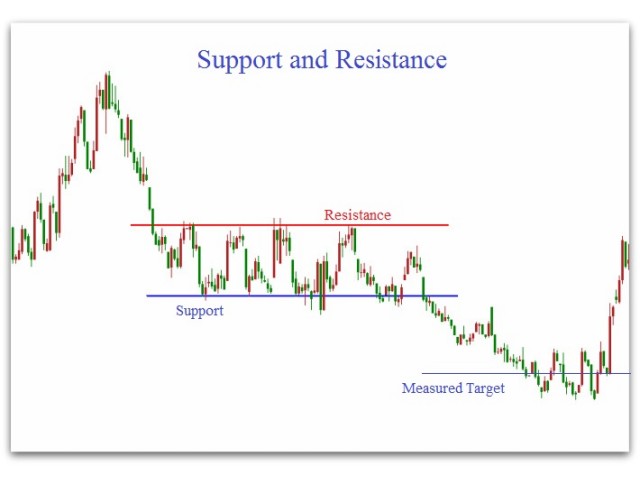 Traders are trying to make purchases directly in or near areas during the upward trend, where significant support can be expected.

Conversely, in the downward trend period, they are trying to make sales where significant resistance can be expected.

Many of you have heard the old clichés used by the business people: Buy when the market is low and sell when it’s high. Traders in new forex markets often ask how the terms down or low and above respectively. high definition. One of the ways in which these levels can be quantified is to use an area where price movements have stopped and changed direction. The area where the price stopped after it grew and turned around is called resistance. Resistance basically works as a ceiling for further price growth.

Resistance is not just a random point where price developments turn around. There are potential sellers, traders who remember well how they shared their strength in order to push down prices after selling the pair of currencies. Others, on the other hand, took a long position at the time of the promotion, and were subsequently disappointed when the price had not risen and nothing left but to close their purchases with a sales order at or just before the price reached the resistance level.

Another group that creates resistance is traders who make their purchases at a resistance point or near, and if the price drops, they get into a troublesome situation. These traders then wary of asking for the price to rise repeatedly and offset any losses. All these groups are working together, which reduces prices and creates an “offer” in terms of supply and demand. As is known, if supply exceeds demand, prices are falling, if the opposite is true, prices are rising. Resistance is equal to our offer in our case.

At the time of the upward trend, traders are trying to make purchases at the support level and earn profits at a subsequent level of resistance. By engaging in support-level trading at an upward trend, participants in forex markets can reduce potential risk and take advantage of the opportunity with an excellent balance between the risk incurred and the resulting remuneration. They can identify several places where they can proceed according to current developments. Levels of resistance can be used as target areas of profit or, breakthrough opportunities if the price stops above the resistance level.

On the other hand, levels of significant resistance offer the ideal moment of commencement of trading in the event of a downward trend. The opposite trend is obvious, ie the exhaustion of purchases at the moment of return of the sellers. The following levels of support can be used in the given case as target areas or as breakthroughs, if prices stop below the level of support.

In areas of support and resistance, there is a clear view of achieving a balance of power, where the price can first be pushed from bottom to bottom, and once it reaches the ceiling, it goes down again. For the Forex trader, it is especially important to capture the overall trend and then, at an appropriate time, to make a purchase, at the level of support in the case of an upward trend or sales, at resistance level in the downward trend. In order to better identify significant areas of support or resistance, RSI oscillators or stochastic methods can also be used.