Sliding diameter and its use and moving average 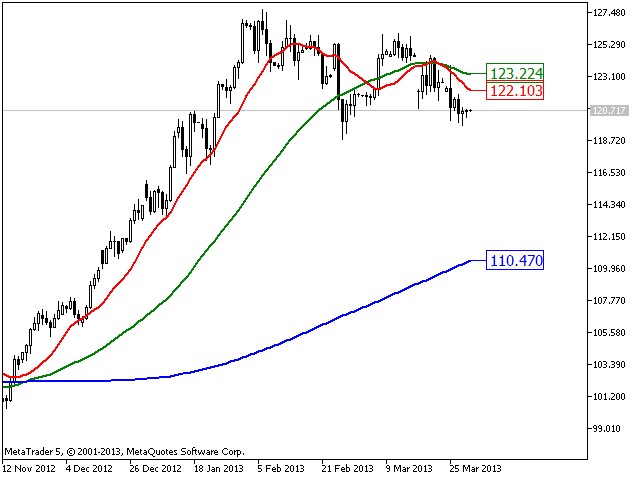 There are a number of things to consider when trading. If you want to be successful as trader, you need to incorporate various factors and indicators into our analysis regardless of the length of trading. This is a fundamental, technical or technical indicator and their combination. On the other hand, our graphs should not be overstated with too many indicators that could contradict each other and reduce the value of our graph. We have seen many merchants, especially novices, who have plotted their graphs with all sorts of lines and pointers, which in the end became more of a burden than a tool. Looking at such a mix of lines, one does not even know what they mean. I definitely recommend not doing more science than doing what it really is. The graphs should be easy to understand and the interpretation of the indicators unambiguous. Simpler indicators work better as they are used by a greater number of traders and thus the likelihood of the proper development of trading based on these indicators increases.

One of the simplest indicators is moving average (KP). It is easy to interpret and graphically depicted, thus eliminating the need for calculation. Just keep track of when the price approaches the line showing the average and, depending on the situation, either buy or sell. The moving average acts as a cushion of support and resistance prices. Moving average occurs in four forms plain, smoothed, exponential, and linearly weighted. For us, it’s important that we do not have to guess which one to use. Just look into the chart history and use the one that has proven the best in the past. This simplicity is one of the main advantages of the indicator. On our charts we usually see 3 to4 diameters. For simplicity we will use values ​​in rounded form. I personally draw 50 and 100 single values ​​and 100 and 200 values ​​of Smoothed moving average on my charts. Sometimes, especially in times of strong trend and charts with a shorter time horizon, it is appropriate to include 20 exponential moving average values. Application is possible with candle charts at the start or end of trading, however, the final price is the most practical. The KP numbers indicate the number of candles used to calculate them, for example, for 50 values ​​per hour chart, the closing price of trading for the last 50 candles is calculated. However, we do not need to know the formula for calculation, all brokers have this indicator along with the trading platform. It is important for us to know how to use the indicators in trading.

After a brief introduction, we can move on to the most important part: the possibilities of the practical use of KP in trading. The moving average is a useful trend-indicating tool. If the CP is below the price level, we are talking about the upward trend. If the situation is the opposite, the trend is descending. If the price is below KP moves, the trend direction changes. To confirm the trend change, it is worthwhile to wait for the change to take effect over a longer period of time. For this reason, I personally use a larger number of moving averages.EURUSD daily trading chart shows that during the first few months the price was below 50 KP (yellow) and 100 KP (green). In the fourth month, 50 moving average values ​​were broken, indicating the possible rise of the upward trend. However, we see in the graph that similar developments have occurred several times in the past. To be sure, it is better to wait for 100 values ​​to break. Over the next week, 100 values ​​broke, confirming the trend, while in the next part of the year the price during the upward trend hit 50 values ​​three times, suggesting a trend reversal. However, it did not fall below 100, so the trend remained untouched. These are false signals that we should be aware of. For us, that means another reason to use a larger number of moving averages. Another safe way of distinguishing trends using the rolling average is the crossover strategy. In this case, only two moving averages are used, usually 10 and 20 values. We know that lower KP moves faster, and as soon as the trend starts, it leads to crossing, respectively. intersection of the second moving average. In our case, the green line crosses the red line. As soon as this phenomenon occurs, the trend is confirmed, and we can start in the same direction. The strategy described is a called lagged strategy. This means that we notice the trend with a certain amount of time. So it would be possible for us to start trading only when the trend ends. That’s why we use this method for longer-term trading.

Both explained strategies are among the delayed strategies. The moving average works well for them. I personally prefer to use moving average as the lead indicator. moving average is a very useful tool for providing resistance and price support at an upward or downward trend. Again, it is better to use 2-3 moving average for this strategy because at the moment of breaking one, the second comes into play. We all know that the price does not grow or fall in line. In fact, it goes up, followed by a correction in the opposite direction, and then the price rises again. It often happens that the adjustment is more than the real value of the assets. So if we want to make use of the upward trend in trading, it pays to wait until the correction is complete. But how do we know when the correction ends? It is here that the moving average will help us. Moving average gives the best results in combination with another indicator such as a stochastic indicator or RSI indicator. The EURUSD pair trading chart shows this strategy perfectly. The chart shows how many corrections for 50 or 100 values ​​were made during the upward trend. It may touch the moving average or approach it. Nothing works like a template. Therefore, you need to have some space before entering a stop command. At the same time, stochastics reached the level of over-sales over the purchase. This confirms that the correction has ended and the time has come to buy. For us, it means entering, depending on the traded pair and time horizon a stop command at a reasonable level below moving average level. If the corrections shown were consistent with the prices obtained from the chart with a different time horizon, the merchant’s security would have increased. The weekly chart shows the same pair of currencies during the same upward trend. We see that the price is related to 20 exponential moving average values ​​when the correction graph is over. Some traders use daily charts, others a weekly. If these charts match, the resistance is stronger because the pair buys both groups, reinforcing it. During a strong trend, moving average support and resistance is provided for a shorter period. Later, when the trends weaken and KP breaks, it will enter the KP game for a longer period. That’s why you need to take caution when opening positions and do so only after the trend slows down. The EURUSD trading chart shows that 20 exponential moving average values ​​have provided resistance and good sales opportunities during a strong downward trend. As soon as the trend slowed, our 50 and 100 KP values ​​plus 100 smoothed moving averages resolved to provide resistance.

The same can be said of trends that are starting slower, but they are taking pace at the same time. The moving average for a longer period provides support at the beginning of the trend. However, as soon as the trend intensifies, it will replace it for a shorter period. What we should know is that KPs provide resistance, but once they break, they will change into support, and vice versa. On this graph we can see that KP at the beginning had 20 and 50 values as resistance. But as soon as the price rose above their level, it changed into support.