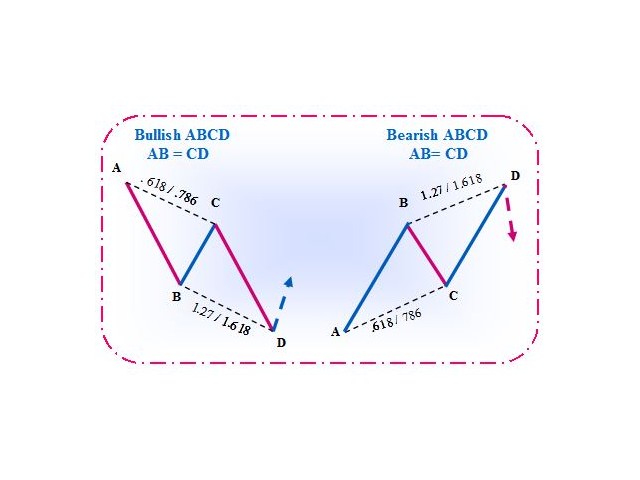 Harmonic formations are essentially geometric formations that use the ratios between individual market movements. To measure these ratios, one of the best-known helpers of the technical analysis with Fibonacci return. Harmonic analysis has a great advantage in the ability to outline the future. While other types of technical analysis are based on the past, the harmonic analysis can predict several days ahead.

Individual harmonic formations use Fibonaccis numbers and combine the theory of repetitive formations and mathematics. The basis of the analysis is the called gold ratio or the value of 0.618 and its subsequent derivations. The most important values ​​are 0.382, 0.50, 1.41, 2.0, 2.24, 2.618, 3.14, 3.618. The golden ratio does not come from the world of trading, but it is all around us, so Fibonacci has reached it and is now used in a lot of business strategies. Measurement of the individual ratios between consecutive movements creates harmonic formations. History has already discovered a few for the present, but some formations may still be hidden in market movements. The method of harmonious trading has recently become popular with well known forex guru Scott Carney, who has established Gartley’s harmonious trading forefront. He contributed his study to new formations such as a bat, a shark or a butterfly. The way this analysis is often dismissed for its complexity, but the practice of harmonic analysis is one of the most unnatural ways of reading the market.

AB – CD or how to determine take profit

Very often, traders are having trouble questioning where to take the take profit order, where to open an open position, etc? It is precisely this dilemma that corresponds to AB – CD. In this article, we will only deal with the ideal AB – CD formation so that it can be used in real trading. Among other things, the same phenomenon can be found in Elliott’s wave theory. This market formation involves the knowledge of using Fibonacci’s return, whether in Metatrader or anywhere else. The basis for this strategy is to create the impulse wave marked by AB points. The ideal impulse is one that is straightforward, that is, if it is a growth pulse then there is no bear candle between the points AB and vice versa. Of course, it is not always possible to expect the emergence of an ideal situation, and in the market the AB impulses as shown in the picture will appear. The impulse is followed by a correction movement, which ideally reaches 61.8 % of AB. At this level, most traders are already trying to enter the market while speculating on D’s. However, it should be remembered that at a time when the market is at a 61.8 % correction, it is still not certain whether point C will be generated and formation is not complete. Only when the market moves in the direction towards D, which should lie close to level 161.8, then AB – CD formation can be said. The ratios between individual movements may not always be strictly 61.8 and 161.8, and the ratios shown in the figure below may also be used. However, it is always good to think that with the high-quality signal the biggest profits are coming and it is appropriate to be patient.

– AB and CDs are the same length

In harmonic formations, it is about where the so-called PRZ is and how the market responds to it when it comes to approaching it. By depicting the AB – CD, we get a level that has the potential to be reversed, at point D, so there is a solid chance of turning in these places. At this level, it pays to enter the store after creating a business signal. Such a signal may be a turnip candy formation, a divergence, or a crossing of the rolling averages, anything that forces the trader to squeeze the tap.